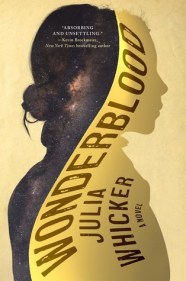 Synopsis from Goodreads:
Wonderblood is Julia Whicker’s fascinating literary debut, set in a barren United States, an apocalyptic wasteland where warring factions compete for control of the land in strange and dangerous carnivals. A mad cow-like disease called “Bent Head” has killed off millions. Those who remain worship the ruins of NASA’s space shuttles, and Cape Canaveral is their Mecca. Medicine and science have been rejected in favor of magic, prophecy, and blood sacrifice. When traveling marauders led by the bloodthirsty Mr. Capulatio invade her camp, a young girl named Aurora is taken captive as his bride and forced to join his band on their journey to Cape Canaveral. As war nears, she must decide if she is willing to become her captor’s queen. But then other queens emerge, some grotesque and others aggrieved, and not all are pleased with the girl’s ascent. Politics and survival are at the centre of this ravishing novel.

Wonderblood is the next book to come out in the post-apocalypse genre, but with a slightly different take. Set a thousand years after civilization as we know it, in a world still threatened by the disease that killed off the majority of the population and ravaged the land, the characters in this novel inhabit a violent and mystical world. Science and fact has been rejected in favour of magic and prophecy, built around a worship of the astronauts of an age previous. What I loved about this book was it’s unique take on a genre that is beginning to become a bit tired. Post-apocalypse tales are becoming wide spread–which I do enjoy–however, it’s refreshing to see something a bit new and different.

The characters and plot have a deep-rooted history that informs how Whicker’s world functions. The world has reverted to a more primitive state and knowledge and power is passed down through bloodlines, or is stolen in violent conflict. The characters, although more simple in their thought process and understanding of the world, are cunning and manipulative. No one is to be trusted and few are redeemable. They are products of their violent and mistrustful world. Whicker is a masterful world builder, drawing you in and surrounding you with this rough and crude world.

What I found absolutely intriguing was the rejection of science in favour of mysticism and magic practices. As well, many of the characters have a strong faith in the astronauts and the celestial, creating a religious commentary that centres around Cape Canaveral as a pseudo-Jerusalem–a homeland to pilgrimage to. The people await The Return of the space shuttles where only the True King of the land will be exalted. It’s a fascinating concept and Whicker goes into great detail to outline the practices of individual groups throughout the novel, exploring a concept wherein our current texts and understanding is distorted through history to become something else entirely in the future.

What left me torn about this novel was that I just couldn’t get hooked to the story. I can’t place my finger on what felt lacking to me, but I just wasn’t driven to pick this story up. Anyone who reads Worn Pages regularly knows that I’m one who likes to connect with the characters and that can make or break a book for me. Well, in the case of Wonderblood, while I enjoyed the world and very much appreciated Whicker’s writing, I couldn’t connect with the story on a page-turning kind of level. It’s left me undecided on this book as a whole.

I would encourage you to read, and I truly hope you do. Anyone who does, please feel free to share a comment letting me, and others, know your thoughts.