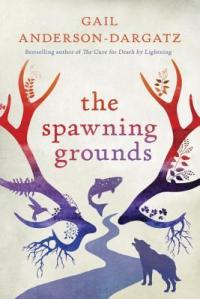 Synopsis from Goodreads:
On one side of the river is a ranch once owned by Eugene Robertson, who came in the gold rush around 1860, and stayed on as a homesteader. On the other side is a Shuswap community that has its own tangled history with the river–and the whites. At the heart of the novel are Hannah and Brandon Robertson, teenagers who have been raised by their grandfather after they lost their mother. As the novel opens, the river is dying, its flow reduced to a trickle, and Hannah is carrying salmon past the choke point to the spawning grounds while her childhood best friend, Alex, leads a Native protest against the development further threatening the river. When drowning nearly claims the lives of both Hannah’s grandfather and her little brother, their world is thrown into chaos. Hannah, Alex, and most especially Brandon come to doubt their own reality as they are pulled deep into Brandon’s numinous visions, which summon the myths of Shuswap culture and tragic family stories of the past.
—–
The Spawning Grounds explores various relationship: between the Shuswap community and the white developers; between Hannah, her brother, Brandon, and their father; between the living and the spirit world; and so many others. This natural and visceral novel is full of spiritual understanding and acceptance. It passes stories and myth down from generation to generation. In tandem with these stories, the natural land belonging to the Shuswap community faces potential destruction.  This place of peace, nature, and spirit is at risk of disappearing at the hands of white developers. Amidst this threat, Hannah risks losing her brother to something eerily similar to what took her mother from her when she was young.
Anderson-Dargatz brings a very beautiful, complex world to life in her novel. The characters struggle to understand and accept the supernatural, spirit world that has intersected with their own. Alex bring forth the teachings and uninhibited belief in the river and salmon spirits. Hannah battles her affection and trust in Alex with her education and her ideas and her secular upbringing. Their father returns after many years away and struggles to gain the trust of his family. His relationship with his family and the people in the town is incredible complicated.
I didn’t find this novel hugely exciting, however it is breathtaking in it’s description of the land and the stories of the past. I found it a little slow moving, however the characters are intricate and compelling. It’s a wonderful Canadian story that shares the wonder of our land and our history. I quite enjoyed this novel overall.