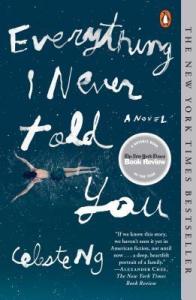 Title: Everything I Never Told You

Synopsis from Goodreads:
“Lydia is dead. But they don’t know this yet.” So begins this exquisite novel about a Chinese American family living in 1970s small-town Ohio. Lydia is the favorite child of Marilyn and James Lee, and her parents are determined that she will fulfill the dreams they were unable to pursue. But when Lydia’s body is found in the local lake, the delicate balancing act that has been keeping the Lee family together is destroyed, tumbling them into chaos. A profoundly moving story of family, secrets, and longing, Everything I Never Told You is both a gripping page-turner and a sensitive family portrait, uncovering the ways in which mothers and daughters, fathers and sons, and husbands and wives struggle, all their lives, to understand one another.
—–
An intense family drama set in the 1970s, Everything I Never Told You is the story of a mixed race family that finds itself torn apart by the death of one of its members. Sixteen-year-old Lydia is found at the bottom of the lake, her death a mystery. This novel is an intricate character study first of two young adults, a woman and a Chinese man, coming of age in a tumultuous time for minorities. Marilyn wants to be a doctor in a world where, as a woman, she is told that she is better off staying at home to cook and take care of her family. James is a Chinese man, first generation born in America. Their relationships is illegal in some states, but they don’t care. They put love first and form a family. They are not without their troubles, which are sometimes quite great, but they’ve made a life for themselves and their children.
When Lydia goes missing, everything this family has ever known is called into question. Her absence, especially once her death is ruled a suicide, forces each person to question themselves intimately.  Had they played a part in driving her to her death? What was the last thing they’d said to one another? Although a short novel, this story whips by as you get to know James and Marilyn, their surviving children Nath and Hannah, and of course Lydia. The portrait of these characters is so fantastic because it depicts that no matter how good one’s intentions, it’s hard to escape one’s own personal struggles to put the needs of others–even family members–above one’s own. This story is great because this family isn’t perfect. They misunderstand each other. They judge each other. But what matters most is that they are somehow able to forgive one another despite it all.
It’s an emotional rollercoaster of a story that reveals how delicate the family structure can really be. If you can get through this book without crying, then you have a heart of stone! 😉  There’s fear, anger, jealous, passion, love, desire, and so much more packed into these few pages.