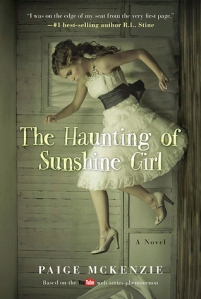 Title: The Haunting of Sunshine Girl

Synopsis from Goodreads:
Based on the wildly popular YouTube channel, The Haunting of Sunshine Girl has been described as “ Gilmore Girls meets Paranormal Activity for the new media age.” YA fans new and old will learn the secrets behind Sunshine—the adorkable girl living in a haunted house—a story that is much bigger, and runs much deeper, than even the most devoted viewer can imagine…

I should start off by saying that I’m not a ghost story person. This book is unlike anything that I read and have ever read. And I enjoyed it so much. The Haunting of Sunshine Girl will have you covered in goosebumps as you wait to see how the paranormal activities in the home of Sunshine and her mother, Kat, will unfold. Good spirits are tormented by evil spirits and Sunshine, a “luiseach” able to tune in to the ghostly world around her, is a direct witness to their activities and the terror they wreak on the world.

I actually didn’t know this book is based on a YouTube series, but the story translates extremely well to the written word. McKenzie and Sheinmel take the time to set the tone of the book. The setting is tangible, wet, and saturated. They bring Sunshine’s fear to life. Sunshine as a character is actually one of the coolest teen heroines whose stories I’ve read recently. As a luiseach, she has incredible paranormal powers that manifest on her 16th birthday, but they are unknown to her as she’s been raised as a human by a normal, mortal woman. Sunshine befriends Nolan, and it’s this charming, interesting stranger that helps Paige to discover what she is. Paige is strong, devoted, rational, and adaptive. She’s reasonable frightened, but she’s also brave — standing up to learn and fight for those she loves. Although the paranormal occurrences in her house frighten her, she rises to the challenge, interacting and even befriending the ghost of a child.

Sunshine’s friend Nolan is equally as interesting. He’s down to earth and relatable. I loved that the authors created a character that was so connected with his family. He’s a bit bookish, but is passionate about learning more about the paranormal — an interest that he shared with his recently passed grandfather. It’s great to see a story that is not all about the romance. Although there is romantic tension between Nolan and Sunshine, that’s not what the story is about. Their flirtations barely classify as a subplot. I think this tactic of presenting romance makes for a much more plausible and believable story. Sunshine, especially, has bigger fish to fry.

It’s creepy and frightening without being overtly terrifying. The authors perfectly balance the spooky elements of the paranormal with strong character building, the creation of a visceral world, and the interesting discovery of the luiseach. I was sucked into this world. I read half of the book this morning, and finished it later than afternoon.

This for me was 4.5 stars out of 5. Can’t wait for book 2! Do you read any paranormal books? How does this one compare?