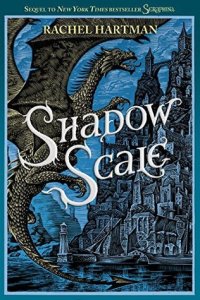 *I received this book on NetGalley in exchange for an honest review.*

Synopsis from Goodreads:
The kingdom of Goredd: a world where humans and dragons share life with an uneasy balance, and those few who are both human and dragon must hide the truth. Seraphina is one of these, part girl, part dragon, who is reluctantly drawn into the politics of her world. When war breaks out between the dragons and humans, she must travel the lands to find those like herself—for she has an inexplicable connection to all of them, and together they will be able to fight the dragons in powerful, magical ways.
As Seraphina gathers this motley crew, she is pursued by humans who want to stop her. But the most terrifying is another half dragon, who can creep into people’s minds and take them over. Until now, Seraphina has kept her mind safe from intruders, but that also means she’s held back her own gift. It is time to make a choice: Cling to the safety of her old life, or embrace a powerful new destiny?

I’m so glad that I didn’t have to wait to read Shadow Scale. As you might remember reading, I only just Seraphina only a month or so ago. I jumped at the chance to read Hartman’s second Seraphina book, and I wasn’t disappointed. The second novel has even more action, heartbreak, and intensity. Seraphina embarks on her quest to track down all of the ityasaari, half-dragons. With the help of the visions she’s seen of the grotesques in her mind garden, and Abdo’s ability to see half-dragon “mind fire,” Seraphina searches her world to unit the ityasaari to aid in stopping the dragon civil war. She uncovers many things that are more evil than she’s ever known, and others that question her moral compass. In her quest for others, she discovers a part of herself that she’d buried deep inside of her.

This book was a complete rush. Seraphina faces major struggles and losses. It’s gripping, it’s moving, and it’s heart-wrenching at times. I couldn’t put it down. I can’t say too much without spoiling the plot, but please pick this series up if you haven’t read it yet. It’s so, so excellent. I definitely recommend it.