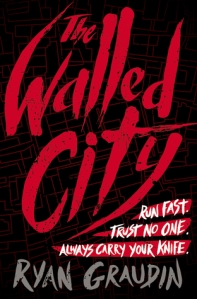 730. That’s how many days I’ve been trapped.
18. That’s how many days I have left to find a way out.
DAI, trying to escape a haunting past, traffics drugs for the most ruthless kingpin in the Walled City. But in order to find the key to his freedom, he needs help from someone with the power to be invisible….
JIN hides under the radar, afraid the wild street gangs will discover her biggest secret: Jin passes as a boy to stay safe. Still, every chance she gets, she searches for her lost sister….
MEI YEE has been trapped in a brothel for the past two years, dreaming of getting out while watching the girls who try fail one by one. She’s about to give up, when one day she sees an unexpected face at her window…..
In this innovative and adrenaline-fueled novel, they all come together in a desperate attempt to escape a lawless labyrinth before the clock runs out.

The setting in The Walled City is probably one of the most unique that I’ve ever encountered. Set in what is actually known as Kowloon Walled City in Hong King, The Walled City is a shamble of an ecosystem surviving independent of the thriving world around it. Thank you to Ryan Graudin for providing me with a new place to focus my obsession of strange, forgotten, and abandoned places; I will now be up all night watching videos and reading articles about Kowloon.

I’ve given this book 4 stars on Goodreads, but that rating more accurately hovers between 3.5 and 4 stars. The setting, as I mentioned before, is captivating, thrilling, and wonderfully different. It’s the perfect setting for a story that sets your pulse racing and quickens your breath. I couldn’t get enough. This is a city of life or death. There is no middle ground. It’s full of cut-throat characters who live to fight and more often than not, who fight to live. In this fully contained world are thriving gangs, crime rings, drug lords, and vagrants all taking advantage of the weak and the helpless. Characters are ruthless, facing death and destruction on a daily basis.

Jin was most definitely my favourite character. She’s one ballsy young woman. She leaves her home, hides her gender, becomes a shadow, kills, fights, loves, all in the slight hope that one day she might find the sister who was stolen from her. She’s the kind of person that in the event that the apocalypse comes in my lifetime, I’d like to be just like her. She’s a survivor.

What took away from the book for me were things like the subplot of the tough vagrants who drop everything for weeks just to hunt Jin down. Her actions against them consume this group completely which is difficult to believe when they too are trying to survive in this unforgiving world. As well, the relationship that forms overnight between Jin’s friend Dai and Jin’s sister seems far too rushed. It draws such a focus in the book, their relationship really becoming the point of action that leads to the novel’s climax. While I do admire these two characters as taking such a risk all for the sake of hope, it just wasn’t enough for me to believe that a few chance and fleeting encounters could lead to the entire destruction of the city’s ruling crime lord.

Overall, I’m certainly very impressed with how Graudin sets up his story. He has very strong-willed, determined characters and an intriguing setting. I can’t get it out of my head. There are just a few things lacking for me…things that could have made this story absolutely fantastic. It’s a good book, full of heart-stopping, adrenaline filled moments. And it’s a very quick read. I’d definitely recommend this one.