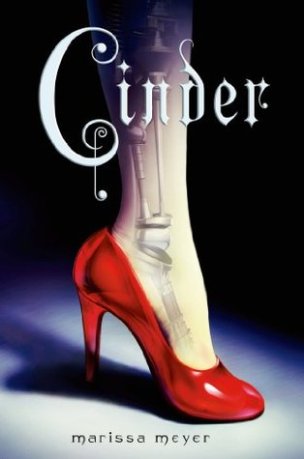 Prepare yourselves. I’ve started on a YA kick. I love YA as much as the next person, but I’m not one to read this exciting genre exclusively. However I’ve devoted a lot of time over the past week to reading YA and I’ve got a whole stack waiting to be read on my nightstand.

I was told (thanks morethanjustmagic.org!) that I HAVE to read this book. I was skeptical at first. Cyborg meets Cinderella; it didn’t really sound like my cup of team. But am I ever grateful! Cinder is a futuristic retelling of the age-old Cinderella story. The protagonist, Cinder, is a mechanic in New Beijing. Her world is wracked by a deadly disease that is picking off the population one by one. Cinder herself seems to be unaffected. When the empire’s Prince Kai seeks out her mechanic skills and establishes a personal connection with her, Cinder is forced to choose between her duty and obligation as a cyborg to her evil and controlling step-mother and her budding romance and freedom with the prince. This story is a captivating reimagining of a timeless classic.

My expectations were so low with this tale when I picked it up. Teen fiction in the last few years for me has become monotonous and repetitive. It’s rare that something stands out among the rest, but this futuristic fairytale sets itself apart with ease in terms of the concept and the world that is created.

Cinder has many strengths. The plot is very strong and well-developed. Cinder is an in-depth character with defined opinions, strict morals, and intense motivation. She forms meaningful relationships with those who are important in her life (her sister Peony and her loyal android Iko). Cinder is passionate about her mechanic job and is very practical in her work and home life. Further, the world in which she lives is so thoroughly constructed that the reader really believes in the setting that is created. Plot elements and descriptions of the setting are consistent, constructing this futuristic system in the empiric ways of old China. In a post-apocalyptic world, it makes sense that the government and society would return to the ruling system that controlled this Asian empire for centuries. Finally, the rhetoric and prose flow well and are easily readable. I did not stumble over the words of the text and I found myself easily moving through the paragraphs.

My mains criticisms surround the character of Kai. I find myself struggling to remember much about him as a character, that’s how unmemorable and dull I found him. The romance that he establishes with Cinder is flat with little meaning behind it. I didn’t really think there was anything concretely romantic between them although there is indication that they are falling in love at the end of the text and the cliffhanging ending suggests that perhaps the romance will bloom in the subsequent texts. What was the basis of the relationship beyond physical attraction? These two characters rarely spend more than a few paragraphs together so can we really believe that Kai would flirt with Cinder (and vice versa) based on attractive personality traits rather than just appearance? I felt as though I didn’t understand Kai at all. We see him through Cinder’s eyes, but I can’t understand why she likes him. As I said, she spends so little time with him that there’s no way she can know him. The reader only knows him as the Prince who wants to do what’s right for his people. Admirable, but not enough for me to fall in love with him. I need more. I think Meyer could have strengthened this element of the story by cutting some of the slower Cinder moments in lieu of a few Kai chapters so the reader can come to understand him and their relationship a little bit more.

Overall, Cinder is a very strong YA fiction novel; however the character’s motivations and their development could have been stronger. Despite this, I will definitely be purchasing a copy of the next book in The Lunar Chronicles series, Scarlet. And if you haven’t read Cinder yet, pick yourself up a copy. Anyone who enjoys YA will not be disappointed.

3 thoughts on “Review of “The Lunar Chronicles: Cinder” by Marissa Meyer”