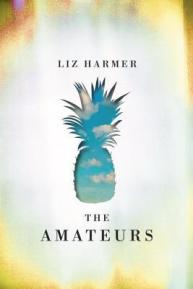 Synopsis from Goodreads:
PINA, the largest tech company in the world, introduces a product called port. These ports offer space-time travel powered by nostalgia and desire. Step inside the port with a destination in mind, and you will be transported. But there is a catch: it’s possible that you cannot come back. And the ports are incredibly seductive, drawing in those with weaker wills…In this world we follow a motley crew camped out in the abandoned mansions and stately church of a former steel-town that has seen its own share of collapse and growth. The group of about thirty adults and children are looting and surviving on what food they can find. But the harsh winter is fast approaching–do they make the choice to head south as a group, or wait to see if their loved ones will return through the ports?

The Amateurs is right up my alley with it’s post-apocalyptic vibe. In this book, the end of human life as we know it doesn’t come about by a disease or by an environmental catastrophe. No, the downfall of humanity in Harmer’s book lies with the world’s pursuit of technology and it’s desire to find something out there that is better than what exists right now. It’s a downfall brought on by arrogance and hubris that leads to the near extinction of the human race. And what’s left behind? A few survivors that we, the readers, get to see, who are struggling to find some sort of normalcy in this newly abandoned world, all while the ports haunt them in ways they couldn’t even imagine.

It’s certainly an interesting story–a fascinating new take on end-of-the-world fiction. It’s imaginative in the development of technology and imagining where are own world might go from here. It parallels our own universe with a tech-savvy wonder who closely resembles Steve Jobs or Elon Musk in the race to produce newer better tech and achieve greater heights in technological development. This really grabbed my attention and makes this story more thoughtful. What I really enjoyed about this book was the author’s ability to weave a mystery surrounding the technology and what is really going on in the world she’s created. Because I’d never read this type of apocalypse story before, I couldn’t predict where Harmer was going to take the story next. That need to know really drives the story.

On the other hand, the story fell flat for me, unfortunately. As much as I was captivated by the idea of this book, the plot was slow to develop. The neato burrito tech does balance a slow story with intriguing content. Time moves slowly in the book and I found myself itching to get through each section in the hope that the next would move a bit quicker. I was hoping to be swept up by one character in particular, but no one really stood out to me. I did like Marie who is part of the group of survivors introduced in the novel’s first section, but there was nothing about her or her story that made me want to root for her. She simply existed.

Further, the ending was rushed and provided little to no resolution. I definitely don’t think this book will have a sequel, so there’s little hope of finding a more concrete conclusion at a later date. I do like this book makes you stop and think about technology in our own world, and to perhaps contemplate when we’ll draw the line. This book raises a lot of good topics and ethical questions. But it just didn’t live up to what I’ve come to hope for and expect in post-apocalyptic fiction.