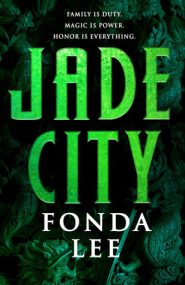 Synopsis from Goodreads:
Magical jade—mined, traded, stolen, and killed for—is the lifeblood of the island of Kekon. For centuries, honorable Green Bone warriors like the Kaul family have used it to enhance their abilities and defend the island from foreign invasion. Now the war is over and a new generation of Kauls vies for control of Kekon’s bustling capital city. They care about nothing but protecting their own, cornering the jade market, and defending the districts under their protection. Ancient tradition has little place in this rapidly changing nation. When a powerful new drug emerges that lets anyone—even foreigners—wield jade, the simmering tension between the Kauls and the rival Ayt family erupts into open violence. The outcome of this clan war will determine the fate of all Green Bones—from their grandest patriarch to the lowliest motorcycle runner on the streets—and of Kekon itself.

After a bit of a slow start, I found myself really enjoying Lee’s The Jade City. I’ll admit, I nearly put it aside once or twice, but I’m so, so glad that I persevered. It took me a while to adjust to the world and to the intricate politics that govern this book, but once I immersed myself, I found that I was swept up in this story. As this tale grew on me, I couldn’t help but get excited for how this world is going to develop in further books. Lee hints at the magic in this story, slowly allowing it to grow and expand as we learn more and more about the characters and their lives. Lee ruminates on the true power of jade throughout the course of this book, taking her time to really explore it’s extent. The reader discovers the true extent of jade’s power as the novel progresses–but I feel like there is so much more to learn in further books.

What I really enjoyed about this book is that Lee is not afraid of conflict and tough times. Her story is about war between two clans, but there is sometimes friction within the clans themselves. The twists throughout this book continuously caught me off guard. I was delighted to find that I couldn’t predict where the story was going to go. This doesn’t happen often and it made this book very enjoyable. We do get to know the No Peak clan very well. We see members struggle internally with one another, but also in some cases with themselves as they try to discover who they are and what they are meant to do with their lives. I can’t say that I connected with any one character in particular, however the world itself is quite complicated and intriguing. The clans have intricate political systems and we really get an intimate look at how the clan system and government interact. Lee goes into great detail in describing the structure and how the officials of each party negotiate and interact with one another. Generally I don’t enjoy books that get too much into the politics, but this story relies on the politics to create suspense and intensity and it does so in an incredibly interesting way.

Overall, I really enjoyed The Jade City. I would have liked to get to know the characters a bit more. Anyone who reads my blog regularly knows that I have a thing for character development. I don’t often connect with a book if I don’t connect with a particular character, but in this case, Lee built an incredibly fascinating world with many twists and turns and I’m very excited to see how things come along in book 2.