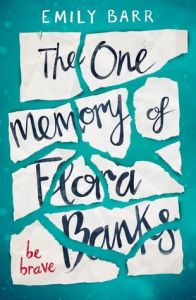 * I received this book from the publisher in exchange for an honest review. *

Title: The One Memory of Flora Banks

Synopsis from Goodreads:
Seventeen-year-old Flora Banks has no short-term memory. Her mind resets itself several times a day, and has since the age of ten, when the tumor that was removed from Flora’s brain took with it her ability to make new memories. That is, until she kisses Drake, her best friend’s boyfriend, the night before he leaves town. Miraculously, this one memory breaks through Flora’s fractured mind, and sticks. Flora is convinced that Drake is responsible for restoring her memory and making her whole again. So when an encouraging email from Drake suggests she meet him on the other side of the world, Flora knows with certainty that this is the first step toward reclaiming her life. With little more than the words “be brave” inked into her skin, and written reminders of who she is and why her memory is so limited, Flora sets off on an impossible journey to Svalbard, Norway, the land of the midnight sun, determined to find Drake. But from the moment she arrives in the arctic, nothing is quite as it seems, and Flora must “be brave” if she is ever to learn the truth about herself, and to make it safely home.

Flora struggles with anterograde amnesia. Her short term memory lasts, at best, a few hours. She is medicated and only a few people are trusted with her care. She goes to school and hangs out with her best friend, Paige, but beyond that, her life is spent at home in the care of her parents. Every time her memory resets, Flora must remember who she is, where she is, and what’s going on–which she does though a series of hand written notes and writing on her arms. This story is about Flora claiming independence, although nearly everyone is against her. Through a series of events, Flora is left alone in the world. With the encouragement of the boy she believes to be her love, and the support of her brother through email exchange, Flora carves out a life for herself in a world that tells her she is incapable. Despite her own fear and perpetual confusion, she takes control of her own life and develops a system to help her remember.

I thought this story was incredibly unique. The protagonist is feisty and strong, yet maintains a child-like innocence and sense of trust. The last age she remembers being is 10 years old, although now, 7 years later, she faces a discrepancy between how she feels mentally and how her body is maturing physically. Flora is incredibly resourceful and manages to rise above her struggles. She’s adventurous and brave, even though sometimes she doesn’t understand what’s happening to her or around her. She’s incredibly likeable to both the reader and to the other characters throughout the book. She makes friends in the town her love her for her friendliness, her openness, her spunk, and her endearing nature.

This story has many layers of tension throughout. First, is the struggle of Flora with her own inability to form long term memories. Her own body is a challenge to her and she must face her own self each and every day. Second, is the conflict between friends: Flora and Paige. Paige is a girl who carries much responsibility as the designated caretaker of Flora in social situations, but Paige is not immune to the struggles of teenagehood and jealousy which creates a rift in their friendship. Third, the battle between Flora and her mother, which Flora is not aware of. Her mother is so full of both love and fear that all she can do is keep a tight grasp on her daughter. With so much tragedy in their lives, her mother’s greatest fear is loosing her child. All of this conflict creates a very complex and layered story. Barr writes so eloquently and masterfully. There are so many things I didn’t expect or see coming in this novel and that made it impossible to put down.

Overall, this was a fantastic read. It’s complexity and endearing characters make it an extremely appealing read. It’s one I know I’ll read again, without a doubt. I wouldn’t be surprised to see this one made in to a movie in the next few years! 🙂

2 thoughts on “Review: The One Memory of Flora Banks”