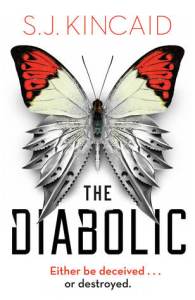 Synopsis from Goodreads:
A Diabolic is ruthless. A Diabolic is powerful. A Diabolic has a single task: Kill in order to protect the person you’ve been created for.  Nemesis is a Diabolic, a humanoid teenager created to protect a galactic senator’s daughter, Sidonia. The two have grown up side by side, but are in no way sisters. Nemesis is expected to give her life for Sidonia, and she would do so gladly. She would also take as many lives as necessary to keep Sidonia safe. When the power-mad Emperor learns Sidonia’s father is participating in a rebellion, he summons Sidonia to the Galactic court. She is to serve as a hostage. Now, there is only one way for Nemesis to protect Sidonia. She must become her. Nemesis travels to the court disguised as Sidonia—a killing machine masquerading in a world of corrupt politicians and two-faced senators’ children. It’s a nest of vipers with threats on every side, but Nemesis must keep her true abilities a secret or risk everything. As the Empire begins to fracture and rebellion looms closer, Nemesis learns there is something more to her than just deadly force. She finds a humanity truer than what she encounters from most humans. Amidst all the danger, action, and intrigue, her humanity just might be the thing that saves her life—and the empire.

It’s nice to see a new YA novel that can easily be the next big thing. In this futuristic world, wealthy humans have escaped the confines of planetary existence. They live in a dystopian regime with a blood thirty, vengeful emperor at its helm. Diabolics exist to serve and protect the aristocratic elite. They have been banned and destroyed…except for Nemesis. Nemesis is at the core of an unconventional coming of age story. She’s a weapon, bred to fight, not to experience humanity. Nemesis must fight to protect everything she’s ever known and cared about.

Nemesis is the most fully developed character and she’s quite interesting. She is learning and uncovering the world as we, the readers, are. I think that her story is fascinating. Nemesis is new to the world outside of the home where she grew up. She’s like a baby, processing new experiences and information as she moves forward. She experiences great tragedy and loss. These experience only serve to make her stronger.

I think that important characters like Sidonia, Nemesis’ charge, or Neveni, Nemesis’ ally, could have been more fleshed out. They both have strong foundations, but they both needed a lot of work to be brought to life. They’re both interesting characters, Neveni especially. She has strong political opinions and a strong drive to fight. But Sidonia in particular, is presented as a more major character and is quickly cut out of the story.

This story is packed full of action. It’s a very interesting, futuristic world that I hope is explored even further in possible future books. Kincaid is a strong world builder. The setting is vivid and expansive. I sense that there are huge portions of this world that are yet unexplored and I hope to read more. This novel is an exciting new sci-fi meets dystopian adventure and is worth the read!