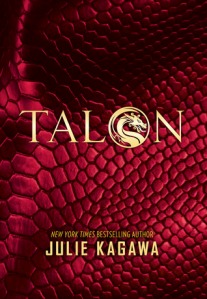 Synopsis from Goodreads:
Long ago, dragons were hunted to near extinction by the Order of St. George, a legendary society of dragon slayers. Hiding in human form and growing their numbers in secret, the dragons of Talon have become strong and cunning, and they’re positioned to take over the world with humans none the wiser. Ember and Dante Hill are the only sister and brother known to dragonkind. Trained to infiltrate society, Ember wants to live the teen experience and enjoy a summer of freedom before taking her destined place in Talon. But destiny is a matter of perspective, and a rogue dragon will soon challenge everything Ember has been taught. As Ember struggles to accept her future, she and her brother are hunted by the Order of St. George. Soldier Garret Xavier Sebastian has a mission to seek and destroy all dragons, and Talon’s newest recruits in particular. But he cannot kill unless he is certain he has found his prey: and nothing is certain about Ember Hill. Faced with Ember’s bravery, confidence and all-too-human desires, Garret begins to question everything that the Order has ingrained in him: and what he might be willing to give up to find the truth about dragons.

I was looking for something light and easy to listen to when I chose Kagawa’s Talon. What I didn’t expect to get was an intense, fantasy tale with gripping plot lines, ancient feuds, and whirlwind romances. Kagawa’s first book in the Talon series had me hooked in minutes and now I’m comparing every YA fantasy title I choose to this one. Reminiscent of Rachel Hartmann’s Seraphina, Talon brings dragons into the modern day.

Living amongst humans, trying to fit in, dragons are struggling to thrive. They are hunted by the Soldiers of St. George. These human weapons have been trained in deadly combat with only one thought in mind: the dragon is your enemy. To St. George, dragons are nothing but mindless, compassionless monsters whose only objective is to kick. That is, until Garret meets Ember. Ember is everything that Garrett ever wanted. She’s intelligent, fierce, beautiful, and lives life on the edge. When he discovers her secret, his perception of dragons forever alters. He’s forced to make life-changing and completely life-altering decisions.

In contrast to St. George is the dragon organization, Talon. Raised from hatchlings in this organization, Ember and her brother have been sculpted to be exactly what Talon wants them to be. Ember struggles to know what her purpose is and what she wants out of life. She begins to doubt the organization that raised her when she meets a Rogue dragon. From the moment Riley comes into her life, nothing is ever the same again.

This is a story about coming into one’s own. Ember is a hatchling dragon searching for what is right and what is good. She has only her instincts to rely on as she is confronted by a world full of dangerous decisions. Ember is forced to make decisions on intuition alone. This world is dangerous, but it offers her freedom and choice. The question is, is she willing to risk everything she loves, and everything she has ever known?

One thought on “Review: Talon by Julie Kagawa”