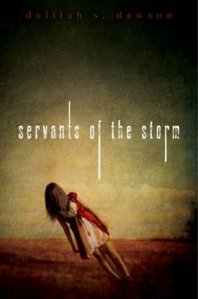 Title: Servants of the Storm

Synopsis from Goodreads:
A year ago, Hurricane Josephine swept through Savannah, Georgia, leaving behind nothing but death and destruction—and taking the life of Dovey’s best friend, Carly. Since that night, Dovey has been in a medicated haze, numb to everything around her. But recently she’s started to believe she’s seeing things that can’t be real…including Carly at their favorite café. Determined to learn the truth, Dovey stops taking her pills. And the world that opens up to her is unlike anything she could have imagined. As Dovey slips deeper into the shadowy corners of Savannah—where the dark and horrifying secrets lurk—she learns that the storm that destroyed her city and stole her friend was much more than a force of nature. And now the sinister beings truly responsible are out to finish what they started.

Servants of the Storm is certainly an interesting taking on the natural disasters that take place here on Earth, but I can’t say I loved this creepy YA novel. The whole story was a bit underwhelming in my opinion. The story starts off strong with a spine-chilling setting of post-hurricane Savannah, Georgia. Like Dovey, we know that something is off about this town, but what’s off has yet to be discovered. I found this initial threat of the unknown to be the strongest part of this story. It was this thrilling beginning that had me on edge. I found that once we discover what’s actually going on, the fear that those first chapters inspires dissipates. There’s something about setting the story in Georgia that creates a ghostly atmosphere and a constant threatening tone. This story has all the elements to make it an excellent ghost story.

I find as you read through, the “scary” elements really lose their steam. What initial seems ghostly and demonic becomes nothing more than a “demon” (and I use this term loosely since their more like human/animal hybrids, reminding me more of more evil fae folk or fairytale creations) drug ring wherein these supernatural beings take over the town without anyone noticing because they’re too doped up. The demons to have the ability to steal the souls of the humans in the town, which does provide a frightening threat to the townspeople, but the higher level demons that present the greatest threat are not often present in the story. It’s the lesser demons (and therefore the less dangerous ones) that we tend to see most often.

I really loved the idea of the hurricane, and similar disasters, bringing in a threatening and evil force. It’s a great concept, but this novel doesn’t really see this great idea come to fruition. The focus tended to be more on the teenage love triangle than anything else. Aren’t we over this trope yet? It’s nothing new. I did really enjoy one of the love interests, Isaac. He’s human, but not quite human. He’s mysterious and has a dangerous edge. All around, he’s probably the most interesting character in this story.

Overall, not very impressed with this story.