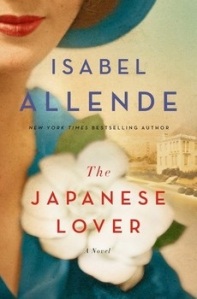 *I received this book from Simon & Schuster CA in exchange for an honest review.*

Synopsis from Goodreads:
In 1939, as Poland falls under the shadow of the Nazis, young Alma Belasco’s parents send her away to live in safety with an aunt and uncle in their opulent mansion in San Francisco. There, as the rest of the world goes to war, she encounters Ichimei Fukuda, the quiet and gentle son of the family’s Japanese gardener. Unnoticed by those around them, a tender love affair begins to blossom. Following the Japanese attack on Pearl Harbor, the two are cruelly pulled apart as Ichimei and his family, like thousands of other Japanese Americans are declared enemies and forcibly relocated to internment camps run by the United States government. Throughout their lifetimes, Alma and Ichimei reunite again and again, but theirs is a love that they are forever forced to hide from the world. Decades later, Alma is nearing the end of her long and eventful life. Irina Bazili, a care worker struggling to come to terms with her own troubled past, meets the elderly woman and her grandson, Seth, at San Francisco’s charmingly eccentric Lark House nursing home. As Irina and Seth forge a friendship, they become intrigued by a series of mysterious gifts and letters sent to Alma, eventually learning about Ichimei and this extraordinary secret passion that has endured for nearly seventy years.

This novel was my first encounter with Allende’s writing. Her words are inviting and easy to read. Her style, once translated into English, is quite reminiscent of author Lisa See, an author who often writes of Chinese Americans living in California. The time period chosen by Allende lends itself not only to great tragedy, but also to sweeping romance. Alma has lived a life surrounded by love, friendship, passion, and beauty. Her story is quite idyllic. Although she has suffered and has made tough choices throughout her life, Alma is a woman who sought out and achieved success. She’s a powerhouse woman.

Her live is accentuated by her heated romance with the son of the Japanese gardener, Ichimei. While we never fully get to know Ichimei, only knowing him through Alma’s memories and the few letters that are shared, we know that his love for his friend and neighbour is a love that transcends time, distance, and all struggle. Historically speaking, Ichimei’s story is quite interesting as his experience as a Japanese boy gives the reader a look into the concentration camps that housed the Japanese population after the attack on Pearl Harbour. I would have been interested to read more about this part in Ichimei’s life, along with young Alma’s understanding of the event. I felt that it was glossed over a bit and the full tragedy and weight of the experience is not fully conveyed.

In her age, Alma encounters Irina, a mysterious woman working at Alma’s place of residence, Lark House. Irina has her own tumultuous past, her troubles somewhat mirroring Alma’s struggles in her early adult life. The connection between these two is one of friendship and confidence. I’m drawn to the familial bond they seem to form throughout the story. Irina is as much a mystery to the read as she is to the characters in the book, keeping her distance until late in the novel when the time comes for her to reveal her own story.

I found Irina’s relationship to the men in her life somewhat problematic. In each encounter with a man in a sexual or romantic encounter, Irina’s voice is taken from her, sometimes in a violent manner. Those who know her history continue to rob her of her own voice and opinion, forcing her to move on from her past at a pace that I found jarring. Her own desires become secondary to the desires of the men that surround her and her hard-earned achievements are trivialized. In this regard she is the opposite of the adored and successful Alma. Irina is a quiet woman and I wanted to hear more from her and to know her better. I think that she got a bit lost in this story, perhaps lost in translation so to speak.

Overall, The Japanese Lover is a passionate story that draws on the history of the late 1930s and early 1940s as the catalyst for the events that come after. It is not without it’s problems, and I really wrestled with the treatment of the character of Irina, which is why I’ve given it 3 out of 5 stars. Please don’t let this dissuade you from reading this romantic translation. It shares a romance that spans the 20th century, finding strength in the setbacks and conquering even death.