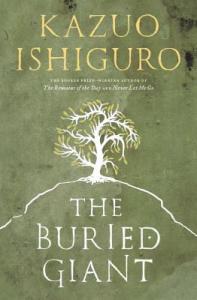 Synopsis from Goodreads:
The Romans have long since departed, and Britain is steadily declining into ruin. But at least the wars that once ravaged the country have ceased. The Buried Giant begins as a couple, Axl and Beatrice, set off across a troubled land of mist and rain in the hope of finding a son they have not seen for years. They expect to face many hazards—some strange and other-worldly—but they cannot yet foresee how their journey will reveal to them dark and forgotten corners of their love for one another. Sometimes savage, often intensely moving, Kazuo Ishiguro’s first novel in a decade is about lost memories, love, revenge and war.

I think that there are many people out there that wont like this book because it’s so vastly different than Ishiguro’s previous novels. For anyone who waited a decade for another book similar to what he’s written in the past, you will be disappointed. It’s unfortunate that so many authors are condemned when they try to write outside of their original genre. We as readers don’t make it easy on writers to try something new and to pursue different writing styles.

That being said, I actually quite enjoyed Ishiguro’s The Buried Giant, although it took me a while to really get into the swing of things. Ishiguro shares the story of the times from a variety of perspective with the overarching theme of memory. This novel asks the question, although some things are better left forgotten, is it sometimes necessary to recall the terrible past? Can forgetting a history of terrible crimes change how we act in the present and future or do we need that memory as a reminder to never commit similar crimes again?

The Buried Giant is a fantasy, and adventure, and a love story. The world is full of ogres and pixies, but the story really isn’t about that. It’s a tale of a love between a husband and wife who, on their adventure, rekindle a love and devotion that had softened in the everyday routine, and despite the odds, their age, and the mist that causes them to forget even their past selves, they make their way out of the safety of their settlement in search of their son and their memories. What I loved of this couple was their dedication to one another. As they walk along, Beatrice constantly checks in with Axl who walks behind her to keep her safe, and Axl always checks in to make sure that she is comfortable. One of the times I liked this couple the most is when Axl makes a request of Beatrice: if the fog ever lifts and her memories return to her, even if she remembers terrible things about him from long ago, she will instead remember him for the devoted and loving man he has become, and let the awfulness of the past fade away again. She agrees. They are so willing to forgive one another, even when they aren’t quite sure what it is that they’re forgiving.

While Ishiguro does shift the speaker and the point of view between characters, often other than Axl and Beatrice, this really gives us insight into the motivations of the different characters and the various peoples at odds with one another, and even amongst themselves. I enjoyed hearing from Axl and Beatrice the best, but there is often an omnicient speaker who tells the story to us as if around a campfire. This particular speaker shares this story with us, fully aware that his story takes place in a different time and a different place. It’s the perfect way to present a fairy tale. I felt this perspective very fitting for the time period of the setting as oral tradition would have been quite prominent at the time. It was a way to share history. The Buried Giant calls on this tradition.

Overall, I enjoyed Ishiguro’s book a lot. Don’t open it expecting the writing style you are familiar with. I encourage you to be open minded and go into this book knowing that you’re reading something new and different, but that doesn’t have to be a bad thing. Ishiguro’s novel is something different, but in its own way, is quite magical.