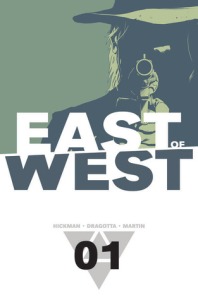 This is the world. It is not the one we wanted, but it is the one we deserved. The Four Horsemen of the Apocalypse roam the Earth, signaling the End Times for humanity, and our best hope for life, lies in DEATH.

I’m finding this a hard book to review. I really enjoyed it. It was complicated, dark, and intelligent. But I don’t have too much to say about it other than it was a really good read. Let’s see what I can come up with. East of West takes place in a future world. The Four Horsemen of the Apocalypse have arrived and an elite group of world leaders called “the Chosen” are working to bring about the end of the world. The whole story has this future-meets-wild-west tone to it, depicted not only in the story with a cowboy villain character, but through the art: a city from the future butt up against a barren wasteland of a desert. It’s exciting to read. I love that Death is modelled after a wild west cowboy, complete with a Matthew Mcconaughey-esque southern accent. He’s edgy and dangerous. The world is fascinating to observe.

I loved this premise for a story. The Four Horsemen: Famine, War, Conquest, and finally, Death, are all frightening and pose a threat to their world. Death is the only Horseman that we really get to know. His story is so interesting, and as we get to know him a little better, is quite tragic. He’s lost so much and he’s working hard to retrieve everything that has been lost to him.

His wife is an even more intriguing character as she has conquered death. She is fierce, strong, and merciless. Together they make an indestructable team, but even they are not immune to the struggles of love. Their relationship has been strained by years of struggle and disconnect. For them, violence is an active part of their life, for Death especially.

I’m excited to get my hands on book two. I hope that Hickman delves further into the stories of his other characters. I hope to see good development in the other Horsemen. Hickman is taking his time to develop his story, letting it play out in it’s own time, but don’t get me wrong, it’s not too slow. He’s nurturing the story and letting it develop. I definitely recommend!