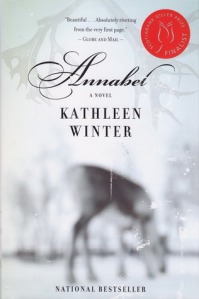 In 1968, into the devastating, spare atmosphere of the remote coastal town of Labrador, Canada, a child is born: a baby who appears to be neither fully boy nor fully girl, but both at once. Only three people are privy to the secret: the baby’s parents, Jacinta and Treadway, and a trusted neighbor and midwife, Thomasina. Though Treadway makes the difficult decision to raise the child as a boy named Wayne, the women continue to quietly nurture the boy’s female side. And as Wayne grows into adulthood within the hyper-masculine hunting society of his father, his shadow-self, a girl he thinks of as “Annabel,” is never entirely extinguished.

Annabel is probably one of the most unique stories that I’ve read this year. I’ve seen this cover around in the past, not really drawn by the muted colours and fuzzy image. The cover does nothing for the powerful, moving, and incredibly difficult story that lies within.

Wayne is born into a town so small, that being as a hermaphrodite, his parents are certain that they cannot raise him as he is for fear of ridicule and violence towards the young child. They chose to raise him as a boy. Each character faces mighty struggles: Wayne’s father Treadway faces his fear for his son and perhaps his fear of the daughter Wayne could be, Jacinta mourns the loss of the daughter that they refuse to accept, Thomasina struggles with the lies she believes should be placed in the open, and Wayne is confused not knowing why he feels the way he does and why his father can’t accept him for who he is.

The story is difficult and often tragic. Wayne’s journey of self-discovery is a bumpy road, but I love him for being brave, for facing uncertainty and his greatest fears, and for taking his own path as he matures into a young adult. Although at times I did find myself losing interest in the lengthy descriptions (very beautiful and very realistic, but sometimes just too much), I was mesmerized by the character development and the breathtaking realism in the emotions. It’s been a long time since I’ve cried reading a book and Kathleen, you’ve brought me to tears.

A Giller Prize finalist, and rightly so, Annabel reveals with rawness, the reality of small-town Canadian life. Winter puts you right into the East coast, into the real Newfoundland, connecting you to characters who are hard-working, tough people with big hearts and open minds (although some struggle with this more than others). I strongly recommend giving Annabel a read. It’s opened my eyes to the struggles of gender and coming of age and societal pressures that are so prevalent in modern society.

Have you read Annabel? What did you think?