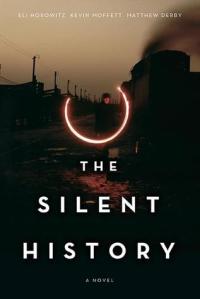 Sometime right around now, doctors, nurses and-most of all-parents begin to notice an epidemic spreading among newborn children, children who are physically normal in every way except that they do not speak and do not respond to speech. They don’t learn to read, don’t learn to write. Theories abound-maybe a popular antidepressant is the cause. Maybe these children, lacking the ability to use or comprehend language, have special skills of their own.

I’ve rated this story 4 stars out of 5 on Goodreads, but really I think I’d give it 3.5 stars out of 5. This synopsis captured my attention right away. I love these stories about mysterious illnesses or epidemics, seemingly insolvable and without any apparent cause. I love the exploration of the way humanity copes with sudden and rapid change. The Silent History is told in the form of testimonials of those who have experiences and interaction with those born without speech, or the “Silents.” These testimonials weave together and carry through the book and through each story, inextricable entwined. It’s fascinating and fast paced and provides a broad scope of understanding and discovery of the Silence.

The plot starts of really strong. I was so invested in the story for the first 200 pages or so. This eerie silences pops up in the new generation of children. They’re quite from birth and appear incapable of communication of any kind. This causes a crisis among the speaking population who are unable to communication and connect with the Silents and who begin to question their own sense of selves and their own way of communication. The whole world becomes involved in the struggle as the Silence is of epidemic proportions.

I also love how this story was originally released serially as an ebook. It’s the perfect story to be released in instalments. The story then is revealed bit by bit as the trauma unfolds. I would have loved to participate in the reading of this book in this original publication, rather than as a full novel.

The book is too long for what it is though. I got bored after a while and I soon found myself wishing that I’d rather be done. It could have easily been 150-200 pages less than what it is. I wanted it to be continually quick and intense, but it really just began to drag after a while. It’s such a drastic and dramatic story, it really lends itself to being a shorter, edge-of-your-seat kind of story. It was too long for that kind of suspense. It acted as a major roadblock for me. It slowed me down and dragged out my reading.

Overall, The Silent History didn’t wow me the way I was hoping it would, but it was still a decent read. I wouldn’t dissuade you from reading it at all. It’s a fascinating look at the way humanity functions when our basic way of relaying information to one another collapses and we are left in the dark.