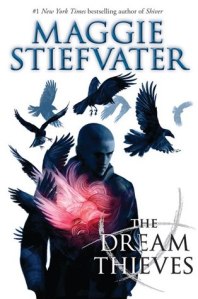 Title: The Dream Thieves, Book II of The Raven Cycle

Now that the ley lines around Cabeswater have been woken, nothing for Ronan, Gansey, Blue, and Adam will be the same. Ronan, for one, is falling more and more deeply into his dreams, and his dreams are intruding more and more into waking life. Meanwhile, some very sinister people are looking for some of the same pieces of the Cabeswater puzzle that Gansey is after…

I did enjoy this book, but I can’t say if I enjoyed it as much as the first. I had a hard time getting through this one. I really enjoyed The Raven Boys for its equal time given to each character. Although some characters were explored more in depth than others, each character seemed to carry equal weight in the book. In The Dream Thieves, I didn’t feel like this was the case.

I want to start by saying I was completely surprised by Ronan Lynch’s character. I had a general dislike for him in the first book, but The Dream Thieves really goes into his struggle with his father’s death, with himself, and with his demons. It was really great to get to know him so much better as a character. The reader really gets to see the Ronan that Gansey befriended, versus the Ronan that he’s become.

What drove me a little crazy was the absence of not only characters but plot points that were introduced in the first book. Blue, a significant fixture in the beginning novel is all but absent in this book. She rarely appears and when she does, her contributions to action and conversation are nearly non-existent. Most often I felt as though the story would have been better without her verbal contributions.

Secondly, her “relationship” with Adam, so clearly developed in book one, becomes nothing. Adam is going through his own issues, which are barely discussed and hardly resolved. The fact that they are both a part of a relationship that is acknowledged only once or twice for the majority of the book is hardly believable. There are very few chapters that depict them thinking about one another, whether in a positive or negative light. This lack of attention is not really common in a budding relationship. The relationship did, however, reach a point of finality, which was nice to see. It was beginning to drag a little and to see things reach a point of closure was a relief.

What carried this book for me were the dreams. This magical element created a fantastical and mystical storyline that was both beautiful and fascinating. It’s safe to say that Ronan’s storyline is enough to carry this book, but it’s not enough to make me completely and wholly love this book. Overall, the main story arc remains interesting and relevant. I do look forward to the coming books in the series.