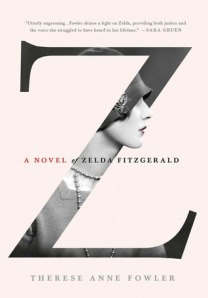 Fowler’s novels tells the story of young Zelda Sayre through her whirlwind romance with F. Scott Fitzgerald, their marriage, and their eventual demise. Zelda is young, beautiful, and reckless when she first meets the creative and boisterous Scott. Their’s is a story of love and the dawn of the Jazz Age. They live a life of glam and excess, but is it enough to sustain their fiery romance? Can love survive success and celebrity and and endless stream of parties?

The author put tons of research into this story and it helped to create an historically accurate, fictionalized tale of one of the world’s most well-known literary couples. I really liked how the author acknowledges the book as a work of fiction that is based on real people and real facts. Fowler says that the focus of the text is on “the emotional journey of the characters.” Fowler uses her skills to bring Zelda to life for the modern day reader in order to share her emotional struggles and her position as a woman and a wife in the early-Twentieth Century.

Fowler does and excellent job of constructing Zelda as a well-rounded person. Zelda gained my sympathy early on, as a woman and as an artist. Her struggle to find individuality and autonomy in her relationship while still trying to maintain her position of loving and devoted wife is representative of women throughout the era as their faced with changing women’s roles and a rapidly changing society.  Zelda is likeable, vivacious, young, and very brave. She connects with the reader in the same way she connects with other characters in the book. Her story is that of small town girl meets the big city. Her romance with Scott is exciting. It’s the passionate love that people dream of, but it’s evident from the start where the cracks will form.

“Z” really for me was reminiscent of The Paris Wife (which tells the story of Hadley and Earnest Hemingway). These stories were extremely similar in my opinion. Perhaps these women lived similar lives and similar marriages, but I felt a little bit like I was reading the same story for the second time. I would have liked to see greater differentiation between these two stories. The only major difference for me was that between the personalities of Zelda and Hadley. Otherwise, their thoughts and their lives are almost mirrors of one another.

Moving on to Zelda’s struggle with mental illness, I really didn’t think Fowler introduced Zelda’s mental state in a way that was conducive with diagnosis of schizophrenia (and potentially bipolar disorder). I felt like I was a little blindsided from the sudden transition from unhappy, neglected wife to mental institution patient. What could have made this plot element stronger is a closer observation of Zelda’s mental state in the chapters leading up to the diagnosis: what is she thinking? feeling? Is she demonstrating a mental deterioration? The reader does see Zelda’s struggle with Scott and her lack of freedom in her marriage. We see the missing romance and the absence of her husband, but it’s not enough for me to believe her diagnosis within the text is accurate. Even the diagnosis of bipolar disorder seems excessive for the behaviours that Zelda displays.

I really did enjoy this book despite my frustrations. Fowler’s writing style reads smoothly and flows well and she sparks life into her characters through her writing. She brings the height of glamour in the Jazz Age to light which carefully addressing more difficult issues of marriage, alcoholism, and female roles in society. It’s an interesting read. I think I’d give it 3.5 stars out of 5.

2 thoughts on “Review – Z: A Novel of Zelda Fitgerald”