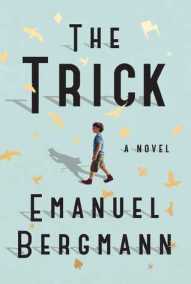 Synopsis from Goodreads:
Sweeping between Prague during World War II and modern day Los Angeles, this deeply moving debut follows a young Jewish man in 1934 who falls in love and joins the circus as the country descends into war. Decades later, a young boy seeks out the now cynical, elderly magician in the hopes that his spells might keep his family together.

The premise of this book is very fascinating: a story in 2 parts, in Europe beneath the big top as the Nazi occupation spreads and in the current day where magic may be the only thing to keep one family together. The story started out strong, building two separate worlds both full of sorrow but also full of possibility, but for me, it went downhill from there. So many of the reviews on Goodreads are good reviews, and perhaps I missed something along the way, but I don’t think this book lives up to the hype. Perhaps something is lost in translation (it is translated from German) or perhaps the translation is not the best, but I found this book didn’t hold my attention and was often aggravating at times.

I have a hard time stopping and giving up on a book midway through. I’m happy I made it all the way through The Trick because I really wanted to find out the resolution, but it felt like one I could have walked away from. I found the characters to be really flat and not at all realistic. The dialogue was weak and lacking throughout and it just made the characters seem a bit stock and empty. A few times, I found myself thinking that no real human would say many of the things in this book. I’m sure many of you readers will know that my favourite thing in a book is complex and realistic characters that I can relate to and believe in, so a lack of such things leaves me very disappointed and unhappy in a book.

I gave this story 2 stars on Goodreads. I liked the premise and I think it had tons of potential, and so many people seemed to really enjoy it. This one just wasn’t for me!